Although polyethylene and polyurethane came from the same plastics family, they are different in terms of utilization and their properties.

A polyurethane (PU) hose is most useful when you need something flexible, and resistant to cracks, punctures, and kinks. On the other hand, a polyethylene (PE) hose is the better option when working with heavier or sharper objects since it does not easily corrode over time. Lastly, the polyethylene hose is FDA-approved, making it the ideal choice for food and beverage applications.

In this article, we will briefly discuss the key features of both materials, including the main differences between PU and PE hoses in terms of the types of material, durability, application, safety, cost, and eco-friendliness to help you answer the burning question, “Which is better?”.

The Differences Between Polyethylene and Polyurethane Hose:

Polyethylene (PE) hose is known to be lightweight but is more on the stiff side, making it durable. It is corrosion resistant, which means that it can be used for a wide range of liquid, gas, and fluid transfer applications. Another distinguishing feature of the PE hose is its enhanced ability to protect moisture.

In contrast, polyurethane (PU) hose is commonly known to be more flexible than polyethylene. Because of its flexible property, it can be trusted to be kink and abrasion-resistant. Moreover, it is commonly used in the manufacturing of hoses.

What Is Difference Between Polyurethane and Polyethylene? 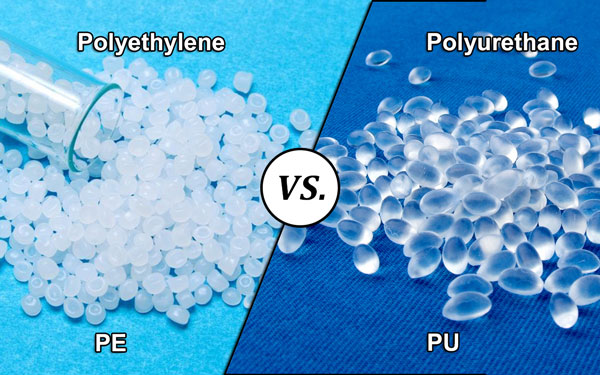 As mentioned before, polyethylene and polyurethane are both in the plastics family but PE is classified as a thermoplastic, which has a lower air permeability. Because of this, it is the most widely used plastic globally. Conversely, PU is considered to be a thermoset, which is moderately permeable to air. Unlike PE, it is not manufactured as much as many other plastics.

Which Is Stronger: Polyethylene or Polyurethane Hose?

Chemically speaking, polyethylene is more durable because the intermolecular force in polyethylene is stronger since it has a lower degree of branching. This means that linear molecules are packed together tightly. Because of this, PE hoses are more suitable to handle heavier and/or sharper objects with a density of 2.2 lb./ft3. With PE being a closed-cell foam, it also has a very low water absorption property.

Polyethylene hose is commonly utilized in laboratory applications such as equipment, chemical lines, and air passage; in food and beverage solutions; and in-hospital applications. Some even use PE hoses for projects such as DIY rope LED lighting.

Polyurethane hose is widely used in the welding trade since it can withstand extreme conditions from 80°F up to 300°F. It is also used in robotics and pneumatic control systems.

Some types of polyurethane tubing meet FDA and NSF standards and are used for food and beverages including potable water, but it tends to transfer odors and tastes.

Polyethylene tubing is known to be more economical with a starting price of less than $3 compared to Polyurethane tubing. PU tubing can cost from $4 to $20, depending on diameter sizes.

Which Is Eco-friendly: Polyethylene or Polyurethane Hose?

While it is known that polyethylene is eco-friendly since it can be produced from renewable resources and does not break down into hazardous gasses, it is still considered non-biodegradable. On the other hand, PU is proven to be susceptible to biodegradation, making it more eco-friendly.

Here’s a comparison chart that can help you quickly understand the differences between Polyethylene and Polyurethane Hose.

Polyethylene vs. Polyurethane Hose: Which is Better?

The answer to this burning question is…it depends. Depending on your design considerations and criteria, both can be used in various projects. However, it is important to remember that polyethylene can be used when extra durability is needed, and if you’re looking for flexibility, polyurethane is the right choice.

With the distinct features that both polyethylene and polyurethane hose offer, the right choice ultimately depends on you. When choosing between both materials, you must first consider your design or project specifications. Make sure that you have taken notes to help you decide wisely!